Here’s a glaringly obvious fact about cold sales emails: they are not hard to write. Running a marathon is hard. Performing open-heart surgery is hard. Taking the time to research a prospective client and send them an email full of useful details is not hard.

So including clues—intentionally or not—that tell a prospect they’re part of an arbitrary mass list makes you look lazy and untrustworthy, and won’t help your response rate.

This company clearly didn’t consider that when it wrote its latest cold sales emails: 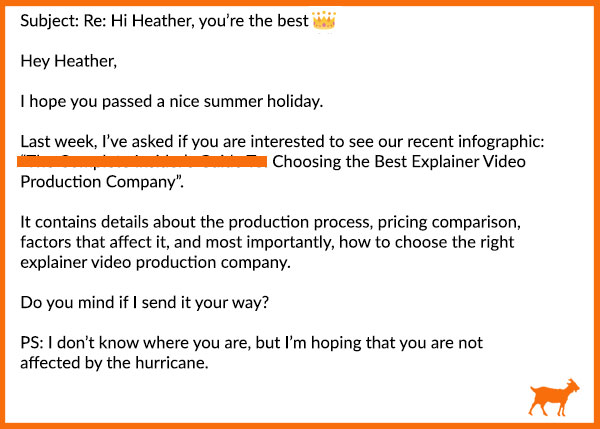 Let’s take a look at what went wrong and how this company could fix their future messages.

1. The recipient has to do all the work.

The first strike here is that instead of providing an explanation about what an “explainer video production company” is, the sender merely references a previously sent email. Maybe that message included an explanation; maybe it didn’t. The point is, the sender wants the recipient to go to the trouble of searching for that initial email, which is more work than you should ever make a prospective customer do.

Why? Because referencing an old email doesn’t count as an explanation—you can’t assume that the recipient saw any of your previous messages. Each email should be unique, with wording and benefits the recipient will relate to. Messages that need to be decoded almost never entice people.

2. The sender openly admits to doing no research.

Never include a line like, “PS: I don’t know where you are, but I’m hoping that you are not affected by the hurricane.”

Not knowing someone’s location underscores the fact that you didn’t research your prospective customers and that this message is part of a mass list. In the case of this email, it’s also callous. The message basically says, “I would love to sell you something even if your life was just severely impacted by a natural disaster.” I probably wouldn’t respond to this message on principle, even if it applied to my business.

Instead, the sender should have checked their recipients’ locations and adjusted the message going to those impacted by the recent hurricanes.

3. The sender relies way too much on filler text.

The second email from this company is more of the same: 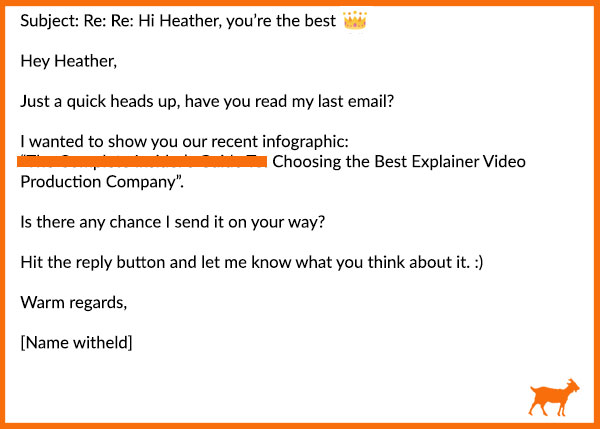 You only have limited time (seconds, actually) to capture a prospect’s attention, so making them work through empty questions like the opening one of this email won’t inspire prospects to read on. The subject line here is also empty of meaning. (Also, why is there a crown involved?)

Finally, the end of this email takes up almost as much space as the main message itself. Telling someone to “hit the reply button” is pointless, even as a pleasantry. Even “let me know what you think about it” falls flat as a call to action (CTA). A better route for this sender would be a simple ask like, “When do you have 15 minutes this week for me to talk to you more about this infographic?”

Finally, there’s that smiley face at the end. I realize a lot of folks believe it can set a pleasant tone for the end of the email. As a salesperson, you should never rely on emoticons to set the mood of your emails. Your time would be way better spent brushing up on basic copywriting skills.

Read any bad cold emails lately? Send them to [email protected] for consideration, and we might include them in our next Hall of Shame post.