Just like with dating, the best cold emails make a point to be seductive. Your goal is to entice new customers into doing what you ask, whether that’s replying to your email, signing up for your newsletter, or making time for a call.

That’s why you need to provide your prospects with a clear and straightforward blueprint on next steps. Ending a date on a vague note leaves everyone feeling unsatisfied. The same is true for cold email: How can you lure someone in if they feel unsure of your intentions? Without a strong and singular call to action, your prospect may be confused or overwhelmed, making it less likely for them to respond.

Mixed messages, like the ones contained in this email, are better left unsent: 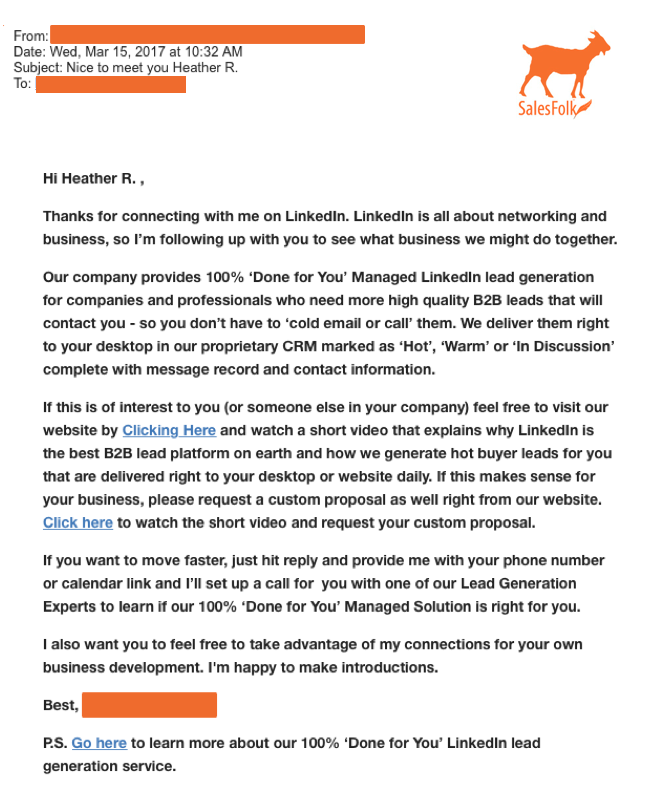 From the start, this email is impersonal, indifferent, wordy, and vague. More importantly, it’s unclear as to what the sender’s call to action really is… because there are eight.

Let’s take a look at where her requests went wrong:

The sender opens with a vague statement that she is “following up to see what business we might do together.” Not only is this an incredibly snooze-inducing opening, it also implies a lack of preparedness on her part. Why is she emailing if she doesn’t already have an idea as to what business you can do together? Isn’t she the one seducing you?

Her next ask, after a long-winded introduction to her unnamed company, is that you visit her website and watch a video about another company, LinkedIn. But does she really care?

By using lazy language like “If this is of interest to you” and “feel free to visit,” the sender makes it seem like she’s indifferent as to whether you follow through. Instead of leaving the invitation so open-ended, she should have incentivized you with added value. Imagine how differently this would read if she promised to share the company’s top secrets for generating hot leads!

But no. Instead, the sender asks you to request a custom proposal from her website, “if this makes sense for your business.” Is she just playing hard to get? A call to action should be simple and clear, and by asking you to take two steps—visiting her site and then requesting a proposal—she just made it less likely that you will respond.

4. Includes too many links

“I know,” the sender might think, “maybe you’d reply if you just watched the short video again.” Fun fact: 80 – 90% of readers will not click on links, so we don’t recommend including them. Plus, they can seem a bit spammy, especially when you include them more than once, as this sender does.

5. Fails to target her pitch

You should also request a custom proposal. Did she mention that already? This is starting to seem a bit self-serving, and no one appreciates a self-centered call to action.

If you are the exception, though, and this redundant generic email has you so intrigued that you want to hear more, the sender tells you that you can email her a lot of information and she’ll arrange a call for you with someone completely different. While a phone call is often the goal of a call to action, the sender’s hand-off approach is impersonal and doesn’t cast the sender, or her company, in a positive light.

That’s okay, though, because she invited you to mine her connections, if you want! Talk about blowing hot and cold.

But really… did you watch the video? Because nothing says fun like a boring demo video.

It’s a lot to unpack, and with the sender delivering so many mixed messages, you can bet the prospect took a hard pass on that [business] relationship.

Please send all submissions to “[email protected]sfolk.com.”
(And feel free to suggest what you want to nominate the “bad cold email for!”)